Let’s look through a fictional situation that likely hits a little close to home.

An enterprise IT shop receives a developer request for a new server resource that is needed for testing. Unfortunately, the developer request doesn’t include all of the information needed to provision the server, so the IT administrator goes back to the developer, and has a discussion about the number of CPUs, and the amount of RAM and storage are needed. That email back-and-forth takes a day. Once that conversation is complete, the IT admin creates a ticket and begins the largely manual workflow of provisioning a server. First, the ticket is assigned to the storage team to create the required storage unit. The ticket is addressed in two days, and then passed on to the network team who ensures that the proper VLANs are created and accessible, and to assign IP addresses. The network team has been pretty busy, though, so their average turnaround is greater than four days. Then, the ticket is handed off back to the virtualization team, where the instance is provisioned, but not until two days later. Think it’s ready to hand off to the user yet?  Not yet. 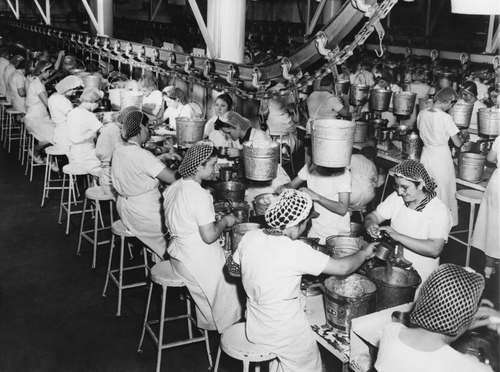 An assembly-line model cannot deploy VMs as rapidly as needed. Automation is required.

The team that manages the virtual environment and creates the VMs is not responsible for installing software. The ticket is forwarded along to the software team, who, three days later, manually installs the needed software on that system, and verifies operation. The virtual server is still not ready to hand off to the developer, though!

You see, there’s also a security and compliance team as well, so the ticket gets handed off to those folks, who a few days later, run a bunch of scans and compliance tests. Now that the virtual resource is in it’s final configuration, it’s got to be ready, right?  Nope. It gets handed off to the configuration management team who then must thoroughly scan the system in order to create a configuration instance in the Configuration Management Database (CMDB). Finally, the instance is finally ready to be delivered to the developer that requested.

The tally is just shy of three full business weeks. What has the developer been doing in the meantime?  Probably not working to his or her full capacity.

Circumventing IT Completely with Shadow IT

Or, maybe that developer got tired of waiting, and after two days went around the entire IT team and ordered an instance from AWS that took five minutes to provision. The developer was so excited about getting a resource that quickly that they bragged to the fellow developers, who in turn start to use AWS.

Negative Effects on IT and the Business

Either way, this is a scenario that plays out repeatedly, and I’m amazed at how frequently it plays out just like this. The result might initially appear to just be some shadow IT, or maybe some VM sprawl from unused deployed instances, however, the potential damage to both the IT organization and the business is far greater.

Furthermore, the IT Consumers are the business. Ensuring that users have access to resources in near-real time should be a goal of every IT org, but rapidly adjusting and transforming the IT teams and processes doesn’t work as quickly as demand changes. This means that the IT org cannot respond with enough agility to continually satisfy the business needs, which in turn potentially means more money is spent to provide less benefit, or even worse, the business misses out on key opportunities.

IT shops need to move beyond simple virtualization and virtualization management. Why? Improved virtualization management does not solve all of the problems presented in the scenario above, while (and this is key here) also providing for continued growth. Implementing tools that only manage virtualization only solve part of the problem, because they are unable to properly unify the provisioning process around software (by going beyond plain template libraries with tools like HPSA, Puppet or Chef), and other external mechanisms (like a CMDB). In order to fully modernize and adapt existing processes and teams to a cloud/service oriented business model, all aspects of the provisioning process must be automated. It’s the only way an IT organization can hope to stay responsive enough, and avoid being locked into one particular solution, such as a single-vendor approach to virtualization. A well-designed and implemented Cloud Manager will give an IT org the freedom to choose the best underlying technology for the job, without regard for how it will be presented to the end user.

Either way you look at it, IT organizations need a solution which will allow them to utilize as much of their existing assets as possible while still providing the governance, security, and serviceability needed to ensure the company’s data and services are well secured and properly supported.

Thankfully, there’s just such a Cloud Manager. CloudBolt C2 is built by a team with decades of combined experience in the systems management space, and was created from the beginning to solve this exact problem. Because we started from the first line of code to solve this entire problem, we call ourselves the next-generation cloud manager, but out customers call it a game changer. Give it a download and effortless install today, and we’ll show you that CloudBolt C2 mean business.