Connect ALL the things!  Webhooks for the win. 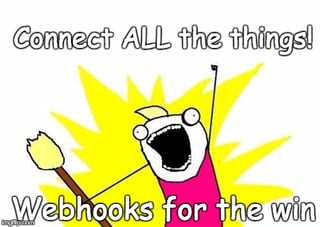 Want to get a text message when your VM is provisioned?  Want to have a Google doc updated anytime somebody provisions a new VM?  Want to be silly and have your stereo play “Die, Die My Darling” every time one of your VMs is deleted?  It’s easy with the power of WebHooks and CloudBolt!

CloudBolt has always been able to be extended via our orchestration hooks and custom code.  This gives an almost unlimited ability to integrate with external systems.  This is (obviously) very powerful but that power comes with inherent complexity and requires some basic programming ability.

One of the relatively new features in CloudBolt is the ability to tie CloudBolt Actions into arbitrary webhooks.  This can be used to do all of the above examples and pretty much anything else you could think of…  all so easily that even the pointy haired boss (otherwise known as me) can do it!

To prove this, I made a quick video.  Here you'll see that in 10 minutes(!), I was able to setup CloudBolt to call my cel phone whenever a VM in my AWS account was deleted - and even tell me what VM was deleted...

To do this, I took advantage of Zapier and its ability to tie various Web apps together.  You could use this same capability to tie CLoudBolt into pretty much anything...  Twitter, Facebook, HipChat, Slack, Asana, etc.......

So...  if even the pointy haired boss can do it, you have no excuse not to!

Please tell us about all the cool systems you've integrated into your CloudBolt ecosystem.  We'd love to hear about it!

END_OF_DOCUMENT_TOKEN_TO_BE_REPLACED

“CloudBolt is on a major growth trajectory—recording consistent year-over-year revenue growth since its founding in 2012. In the past year alone, CloudBolt saw 10x growth in annual recurring revenue and 3x growth in customer deployments,” said Jon Mittelhauser, CEO, CloudBolt. “This award is strong recognition of the benefits that CloudBolt’s cloud delivery platform provides to the enterprise, helping organizations manage their increasingly complex IT environments and bridge legacy, current and future technologies.”

Red Herring Top 100 America enlists outstanding entrepreneurs and promising companies. It selects the award winners from approximately 1,200 privately financed companies each year in the US and Canada. Since 1996, Red Herring has kept tabs on these up-and-comers. Red Herring editors were among the first to recognize that companies such as Facebook, Twitter, Google, Yahoo, Skype, Salesforce.com, YouTube, Palo Alto Networks and eBay would change the way we live and work.

“In 2015, selecting the top achievers was by no means a small feat,” said Alex Vieux, publisher and CEO of Red Herring. “In fact, we had the toughest time in years because so many entrepreneurs had crossed significant milestones so early. But after much thought, rigorous contemplation and discussion, we narrowed our list down from hundreds of candidates from across North America to the North America winners. We believe CloudBolt embodies the vision, drive and innovation that define a successful entrepreneurial venture. CloudBolt should be proud of its accomplishment, as the competition was very strong.”

About Red Herring Top 100 North America
Red Herring’s editorial staff evaluated companies on both quantitative and qualitative criteria, such as financial performance, technological innovation and intellectual property, DNA of the founders, business model, customer footprint and addressable market. A review of the track record and standing of startups relative to their sector peers, allowed Red Herring to see past the “buzz” and make the list a valuable instrument of discovery and advocacy for the most promising new business models in North America, complement this assessment of potential.

About CloudBolt Software
CloudBolt Software transforms how IT interacts with business by significantly improving service to lines of business. CloudBolt is a powerful cloud delivery platform that doubles as an on-premise, unified IT manager and self-service IT portal that leverages existing IT resources and technologies to maximize the value of private and hybrid cloud environments in minutes. Enterprise IT organizations can be more agile with CloudBolt, automating the request, provisioning and ongoing management of systems and applications from an intuitive user interface or through a common API. For more information on CloudBolt visit http://www.cloudbolt.io.

END_OF_DOCUMENT_TOKEN_TO_BE_REPLACED

We are very happy to announce the immediate availability of CloudBolt version 5.0.

The platform’s new features include:

If you are an existing customer, you can immediately download the update through our support portal.  If you have any questions or desire hands on help with the update, please (as always!) feel free to contact us.

If you are interested in downloading and evaluating CloudBolt, you can do so here

END_OF_DOCUMENT_TOKEN_TO_BE_REPLACED

The 2015 OpenStack summit in Vancouver is only a week away!  Are you attending?

CloudBolt's CTO (Bernard Sanders) will be in attendance and is currently setting up meetings with folks who are interested in learning how CloudBolt works seemlessly with OpenStack public and private clouds to provide self-service IT.

If you are interested in learning more about CloudBolt and/or setting up a discussion with Bernard while he's in Vancouver please let us know.  You can reach us at info@cloudbolt.io.